I see Helga and Gino partway down Indian Trail as I’m crossing Sonora. We wave to each other, and I keep going. What, I can’t walk in a different direction so I can say hello? There is no reason I can’t do my little loop in reverse, and even as I decide I think of the different views I will have. I turn back, walk down the street to greet them. Gino, her white poodle, is not interested in me. Bob and Chelsea come around the corner, and Chelsea and Gino touch noses, excited, wagged by their tails. Chelsea runs to me next, and I am surprised to factor in. I like this big, sturdy red dog, and I am pleased she’s happy to see me. Bob is holding a neon yellow green tennis ball. “Were you playing with her on the grass?” I ask, nodding in the direction of the Biltmore. I have thrown the ball for Chelsea before, so I know she becomes intense and focused when she plays, like Sanji used to. The ball becomes the whole world.

“No, I just found it on the side of the road,” Bob says. I think he feels a little funny about that, so I tell him I used to collect tennis balls, too, when I had my dog. For years after she died, I would still be washed by pleasure at the sight of an abandoned ball, seeing that important fuzzy form like finding treasure. Then I would remember Sanji was dead, and I had no use for tennis balls, and I would keep walking. I don’t say it’s been twenty-six years since she died.

I wish Helga and Bob a good day, and I leave them behind. But I am lightened by the brief exchange. I like knowing them, like the belonging of running into them on a morning walk. I am walking south now instead of my usual north, so I get to study my favorite curve of mountains to the south and west. I wonder as I walk when the abandoned tennis ball stopped being such a find, stopped bringing on that eager rush of pleasure. I can’t remember. But I remember Sanji’s passion for playing, her obsession with fetching. She would bark at me when we were at the beach if I didn’t throw the stick she had scrounged. I remember her last frisbee, the chewed orange plastic translucent, bleached by the sun. I remember throwing it for her when we lived in L.A. at that big park with the enormous sycamore trees. She would leap four feet off the ground, her beautiful blonde body twisting in midair to catch the frisbee in her loose dog jaws. She was such an athlete, I think as I walk. It is a new way of relishing her all these years later. 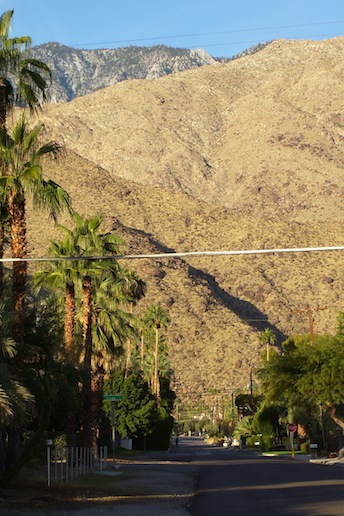 I round the bend and head north on Camino Real, and the mountains I always have my back to are white with new snow. They halt me on the sidewalk, hands on my hips. When I reach Sonora again, I see Helga and Gino three blocks ahead. I stop in the middle of the street. There is something unexpected about seeing someone I know walking below our mountain. It takes my breath. I know I will try to write about this. I vow to bring my camera tomorrow. I watch the two of them walking away, Helga’s droopy white canvas hat and Gino’s white form small spots on the road, bumping up and down as they move. The mountain is unbelievable behind them, steep, immense. It speaks ancient languages, old earth and rock tongues. My neighbor and her poodle are small specks beneath it, skin and bone, teeth and fur, brief sparks. They are relishing the smell and the feel of the cold morning air and the cast of early sunlight spreading before them on the road. They are not noticing the mountain in that moment, only heading home after a good walk. I follow after them and turn down Palo Fierro before they disappear.

I'm a writer and a teacher, though I usually say it in reverse. I hope to find more of a balance between the two. ;-)
View all posts by Riba →
This entry was posted in Home, Life, Nature, Reflections, Spirituality, Thoughts, Walking and tagged Dogs, mountains, San Jacinto. Bookmark the permalink.